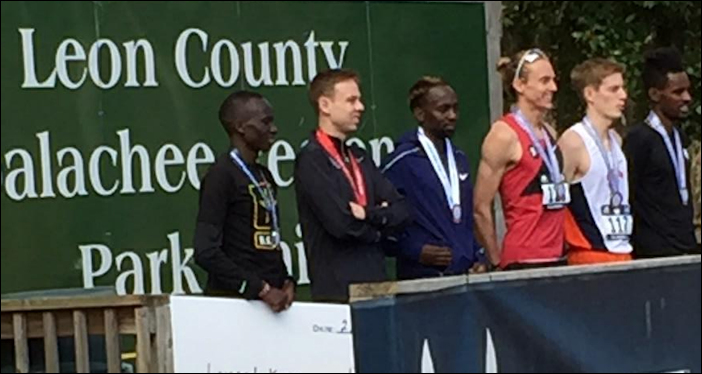 Defending champion Leonard Korir defended his national title with a strong 10k over the course in Apalachee Regional Park in Tallahassee with a time of 29:16.6 while Galen Rupp finished in 29:17.8. Korir also led the US Army team, which won the military teams division over teams from the Air Force, Marine Corps, and Navy. A variety of runners had led during the race, with Rupp taking a slight edge with about one quarter mile to go, but then he was overtaken in the stretch by the defending champ. Steeplechasers Stanley Kebenel and Evan Jager took the next two spots, who finished .1 second apart and were both credited with a time of 29:32. Kebenel and Jager staged a furious sprint to the tape, with Kebenel prevailing. Conditions were ideal, with a temperature of about 50 degrees and no noticeable wind. 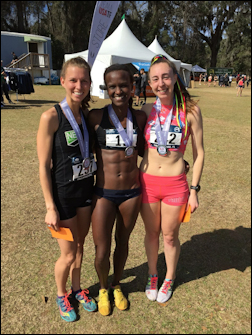 Emily Infeld won her first national title as a pro, which is surprising given her 31:20 10,000 meter PR as well as her World Championships bronze medal in 2015. Infeld was at or near the lead the entire way, along with Molly Seidel, Stephanie Bruce, Courtney Frerichs, and Emily Durgin. Infeld made the winning move on a hill just under one-half mile to go and raised her hands in victory as she broke the tape. She made her Bowerman TC teammate Courtney Frerichs look prescient, as the previous day Frerichs had said she considered Infeld to be the toughest opponent in the race.

The New England Distance team, based in Rhode Island, were outstanding and clustered their finishers in 7th, 8th, and 9th. Members were Katrina Spratford, Obsie Birru, and Rachel Schilkowsky.

In the Masters race earlier in the day, Marisa Sutera Strange of Pleasant Valley, NY finished fourth overall of all those 40 and up at age 54! She also had the second best age graded time of the day and was a member of the Women’s 50 plus first place team. And of course she won the women’s 50 to 54 division. Some HMRRC members may be aware of her astonishing 18 wins in a row (and counting) at the Dutchess County Classic 5k.

Tallahassee will host the Championships again in 2019.The field promises to be even more outstanding, as next year is a World XC Championships year, which means national team spots will be on the line.