Anny Redenius Stockman’s running career has been filled with honors, awards and accolades. Her house is lined from top to bottom with them: silver bowls, crystal bowls, hand-blown glass paper weights, elaborate trophies, plaques, vases, running shoes, money, clothing, medals of all shapes and sorts, and a piece of paper from Freihofer’s. You name it and you can find it here. She has been cited repeatedly in Runners World for honorable mention in all the Masters K-race categories. But recently she received her sweetest awards yet. She has been officially recognized as the National Masters 5K and 15K record holder in the 85-year-old age category and is closing in on the 10K award, which would give her a triple crown in running. She has taken her recent awards modestly but wanted this profile done so that her relatives in Germany could understand the scope of her running and her wondrous achievements. 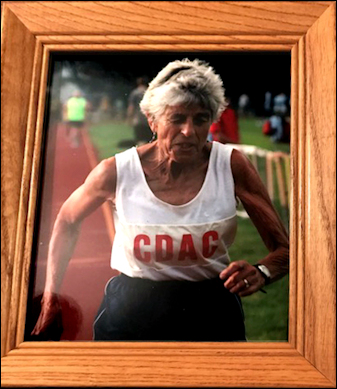 As a child she did not pursue any athletic activity. She was born in 1932, in Aurich, Germany, which is near Holland. It was a time of high unemployment and political unrest with the ascendance of Hitler and the Nazi Party in Germany. Her childhood was defined by a World War that precluded organized sports activities but included air raids and bombings and other horrible occurrences witnessed through a child’s eyes. She came to the United States in 1955 while her sisters and brother opted to stay in Germany. At the boarding house where she stayed she met this handsome American, Wade Stockman, who would become her partner in life and running.
They married and lived happily in the suburbs in Rensselaer, New York. She stayed home to raise three children and develop the gardens around their house, which people stop to take pictures of, while Wade worked as an engineer. Their life went on in this peaceful fashion until their oldest daughter Ingrid took up running in high school. She became a high school track star, which set off a spark in Anny’s mind making her think, “Why can’t I do that too and run with Inge.” So Anny took to the roads by her house always making sure to take routes where the neighbors wouldn’t see her and she gradually increased her mileage until she was ready to compete. In turn, Wade saw Anny and Inge running and thought he could do that too although it took him a year longer to compete. 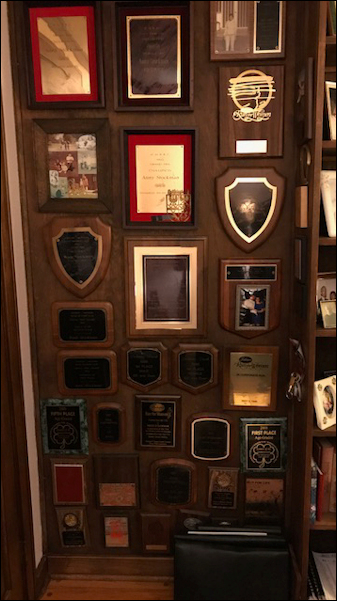 Anny’s first race was the Troy Turkey Trot in 1980 and her victory marked the beginning of the wealth of trophies and awards she would receive in following years. Almost unbelievably she has placed in the top three of almost every race in which she has competed. She and Wade run more than 30 races each year not counting mile runs (you can do the math about the award build up!!). One of the only races she did not finish in the top three in her age category was the Bonne Bell Mini Marathon in Boston. Another person ran ahead of her so she had to settle for fourth place. Complicating things the parking was tight around the Charles River area so Wade parked illegally. When they returned, Wade’s Alfa Romeo was nowhere in sight as it had been towed away. However, the next year Anny placed first at Bonne Bell, their car wasn’t towed, and she never placed below third again!
After their last child left for college, Wade and Anny continued to run leaving the house at 6 p.m. even during the winter when the roads were slippery. They would run 50 to 60 miles a week. They loved running the back roads by their house where they could see the moon glisten on the icy surface of the road during the winter and inhale lovely aromas during the rest of the year. For long runs, they would often team up with other runners. 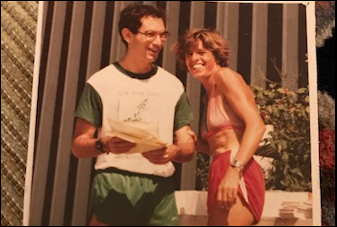 Anny’s next challenge was doing marathons. Her first was in Montreal in 1981. Hot weather did not deter her marathon training. In fact she liked hot weather. She didn’t need much hydration and noticed that while others were sweating profusely she was not. During her first marathon in 1981 the temperature soared to 85 degrees even though it was a fall day. Many of her training friends faded, but Anny like a phoenix finished her first marathon in 3:25 at age 49! When she came through the chute she looked for Wade and found that he had finished ahead of her and was sleeping and snoring on the ground! She later did the Boston Marathon in 3:30 and found it to be an easy race. The wall-to-wall cheering crowds were so encouraging that she didn’t notice going up Heartbreak Hill. She enjoyed it so much she was ready to run the next day. Now, however, it takes her much longer to recover. She ran her last marathon in Berlin, Germany, while visiting her relatives. The day after arriving by plane from the US, she and her family took a bus 325 miles to Berlin and the next day she ran the marathon. Her time of 3:45 was not her best, but she still placed 2nd in her age category at Berlin one of the leading world’s marathons and won the medal you see her wearing in the picture below. 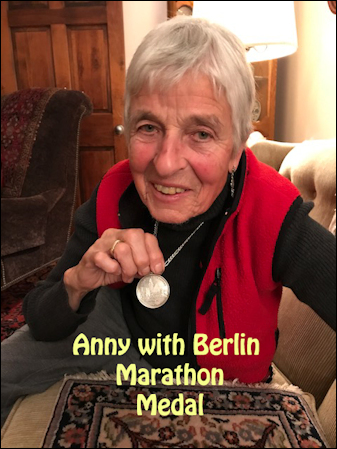 Anny is blessed in other ways. She does not run in pain and in fact has never been in pain while running. Unlike most other runners, she has not been plagued by injuries and therefore has never had to take any breaks since she began running at age 48. She takes no medications other than vitamins and calcium supplements. Now at age 85 she does five 90-minute runs each week. She has no running preferences and loves all distances. She loves hills: the steeper the better. She has won the HMRRC Grand Prix every year in her age category. She especially loves the Stockade-athon, which she has run 35 times. Other favorites include the DC Cherry Blossom Ten Miler, the Leggs Mini-Marathon 10K in NYC, and the annual Adirondack 10 mile race by Lake George. Her favorite race, however, is the Bridge of Flowers 10K race in Massachusetts because of its killer hills. When asked if the beauty of the race with its lavish floral decorations also added to her enjoyment, she emphatically stated that she NEVER looks at the scenery and only focuses intently on the road ahead of her.
As Anny neared her 85th birthday, in 2017 track officials in the area realized that with her running accomplishments, she had the talent to not only win the National Masters’ 5k in Syracuse but to set a record. So she went to Syracuse, ran the race, set a record, but unbeknownst to all discovered that the course was not the required regulation length. So, she ran the race again in Malta, NY. Again she set the record only to find out the course was 60 meters short. The event was rescheduled still again in Syracuse, but this time was the correct regulation course length. Anny ran and set the National Masters’ 5K Record in the 85-year-old women’s category in a National record time of 39:42! 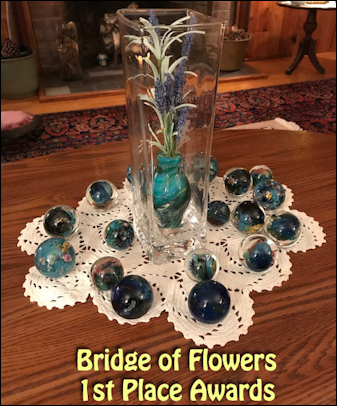