Passing on the Love of Running 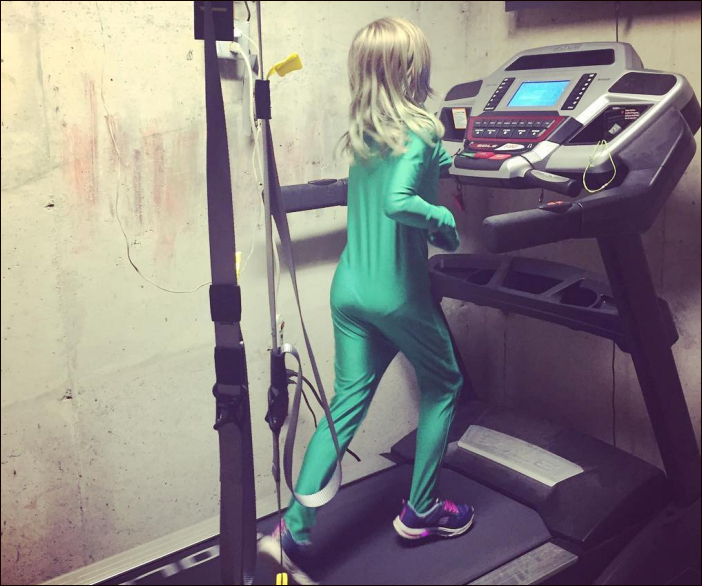 My daughter’s foray into running began in utero. She was my running companion (I use the term running loosely here) until a week before her birth. After that, our running partnership switched over to the running stroller. That glorious invention that allowed me to regain my sanity, some sense of normalcy, and introduce my daughter to her love of speed. What started as very slow, timid miles being overly aware of any bump in the sidewalk that might jostle or wake my napping baby, morphed into hard runs with a chatty toddler and then a full-blown, conversational kid. As soon as I’d get dressed for a run, Scarlett would grab her blanket and climb into her stroller.

Running with Scarlett in the stroller was like running with a built-in coach. She yelled “faster,” even as we raced down hills. She handed me my water bottle, and even offered me some of her snacks (side note: fruit snacks are fine running fuel; graham crackers are not). From the time she was a baby until she was six or seven years old, I rarely logged daylight miles without Scarlett. Whether it was a weekend long run or a quick few miles after work, whether she needed sunglasses and sunscreen or mittens and a snow suit, Scarlett loved going running with me and I adored our time together. It was a sad day when we finally had to retire the BOB.

The next chapter in my daughter’s running story is the 5k. Yes, she ran kids races throughout her running-stroller years, but one day she announced to her father and me that she wanted to run a 5k. I don’t remember how long we made her wait, but when she was 7 years old we found a local run in Hoosick Falls and registered as a family. I told Scarlett both before and during the race that this was just for fun, and that we could turn around at any time if she didn’t want to run the whole thing. She looked up at me as we walked up a big hill on the course and explained to me that “You don’t quit, mom.” Since her first 5k, Scarlett has continued to run local 5ks. Typically, she starts with her father while I race, then I head back along the course to finish with them. Sometimes she has fun the whole race, other times she gets frustrated about hills or needing to walk; however; she always finishes.

Along with running, we try to instill a generally active lifestyle for our family no matter the season. This includes kayaking, bike riding, hiking, and snow shoeing. In fact, when I told Scarlett about this article she responded, “I do love running, but I’m not a runner. Make sure they know that I am a horse back rider.” So, to be clear, despite running three 5ks and numerous kids runs, my daughter is not a runner. If this article was supposed to be about raising a runner, I guess I’m not the right one for the job. However, I’m pretty sure that my husband and I have succeeded in passing on not only the love of running, but also the love of adventure and instilling the self-confidence for Scarlett to define herself as she wants. To me, means that we are on the right track.

Runs In the Family Archive

Bringing Up the Next Generation: A Family Affair by Tom O’Grady