My Wife Signed Me Up for Yoga 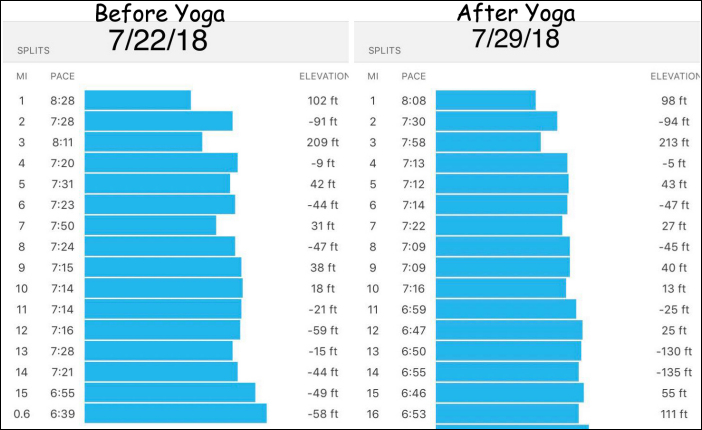 Earlier this week I got a text from my wife, Lauren. She said, we should do yoga together on Saturday, it would mean a lot to me. She doesn’t say that often and when she does I’m definitely in. I was a little skeptical. It doesn’t take much searching to find the benefits and negative consequences of yoga for runners. Either way, I was doing yoga for better or worse.

Just to give a little back story. I went to St. Rose and we stretched with a rope during cross-country and did active warm-up in track and field. I am familiar with stretching routines and how to do them. Currently, my stretching routine before and during a run is simple, I don’t. It’s more of a time vs. benefit thing. I’ve been lucky to be healthy and not get injured often. I should stretch more, but I don’t like to spend the time on it. My coach, Bob Irwin, has me doing strides after easy runs. Even that is new to my regimen since college. Suffice it to say, I was going to be challenged at yoga class.

As a blue-collar guy, working with my hands and hanging around the construction site most days, I never thought I’d be walking down 2nd street in Troy towards heartspace yoga studio on a Saturday morning. I had just finished a 10 mile run and we had to be there for the 8:30 am class. I felt a little awkward so I was cracking jokes to lighten the mood. When we walked in I felt much better about the whole thing. I wasn’t the only guy and there were enough people where I felt like I wouldn’t stand out. I didn’t know a single move so I planned on watching Lauren the whole time so I didn’t make a fool out of myself.

In class, the instructor kept saying different terms and It was like a foreign language. I found myself catching the groove and being challenged. They had blocks to help me “shim” my body when I couldn’t do a pose/move since I’m so inflexible. One thing I really like was the way we kept moving. It wasn’t completely static. I think they used the term “Vinyasa” to describe the type of flow yoga we were doing. I felt like it was a good mixture of stretching and active warm-up. As we were doing different poses/moves I was able to relax and got to think. I started to realize that some of the movements were stretching really tight areas that I would usually leave to the massage therapist to help me with. At $12/yoga class vs. $70/hour for massage, yoga is way cheaper and I didn’t feel like my whole body was sore at the end. We left the class, I was drenched in sweat and smelt ripe as could be. They really work you there. I felt loose and limber. It was good!

I did my run the next day 7/29/18, I was scheduled for 19 miles. This run capped an 83-mile week. My highest mileage in this training cycle. I am currently training for the Wineglass marathon in September. I felt refreshed! The last 2-3 weeks I’ve essentially done the same Sunday run, with the core of it being a hilly 14 miles run and then adding on to get to my scheduled distance. The past few weeks have felt heavy and like I had weights attached to me at the start of each run. Bob has me doing mile repeats as well. I loathe workouts!! I don’t know if it was the yoga or just me getting in shape, but week over week my long run was way easier and faster this week. Maybe yoga is the key! Even if it isn’t, I’ll be back. It was nice to spend time with Lauren and get involved in one of her hobbies.

In addition to being a member of Willow Street Athletic Club, Brad is the proprietor of Lewis Lawn Care & Masonry