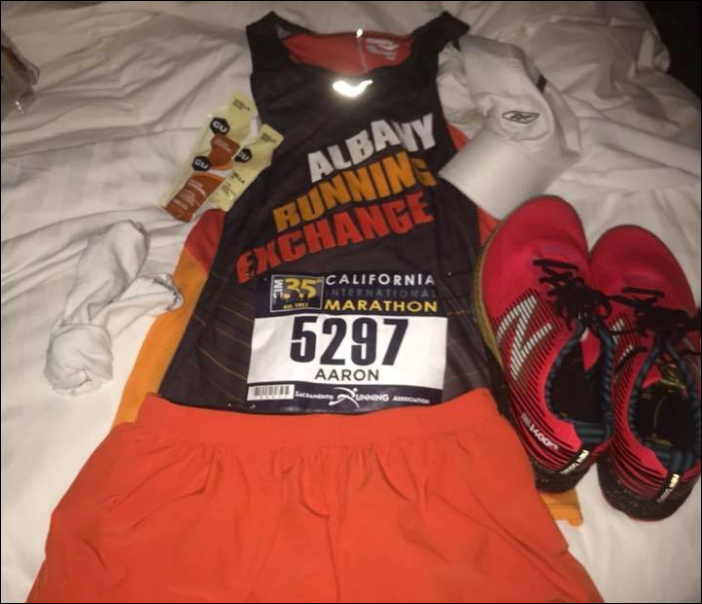 One of the lesser known but really outstanding marathons in the US is the California International Marathon (otherwise known as CIM).  This point-to-point marathon from Folsom to Sacramento California features the same elevation drop as Boston without the “heartbreak”ing hills in the cool temperatures of early December.  With the opening of the Olympic trials qualifying window in the fall, many hopefuls were targeting CIM to reach their goal.  Also, the race served as the 2017 US Marathon Championships.  Not only is the course favorable for fast times but the race attracts a deep field of national class competitive runners similar to some of the famous big city marathons (Chicago, Boston, NYC).  Unofficial pacers were in place to help men and women achieve the Olympic trial standards (2:19 and 2:45 respectively).

The racing year through the first half of 2017 had been fairly disappointing for me.  I think this partly was due to the combination of my recovery from the 2016 Mohawk Hudson Marathon and the arrival of our twins just after the marathon.  For the second half of the year, I started to work with Jeff Goupil and I put in higher volume mileage (67-69mi/wk) with 20 and 22 mi long runs which was different than the Hanson’s plan that I have used in the past.  Once I hit my stride in the training cycle, I felt as good as I had in the last few years.  The final prep race was the Stockade-athon and I had my best race of the year, 3rd masters and close to my best time for that race.  I caught a brief cold just after the race but otherwise stayed healthy and injury free through the training block.

I flew in Friday afternoon and arranged to room with Matt Brooker.  Matt and I are both former members of Bucknell University’s cross country teams (although many years apart).   I also planned to meet my college roommate from Bucknell, Greg, for dinner Friday and Saturday to catch up, which we did along with several of Matt’s local friends.  Saturday, Matt and I went for a shakedown run and to see the end of the marathon.  Coincidently, running backwards on the course, we ran into Aaron Lozier sitting outside his hotel and he joined us.  Aaron had done the race before and gave us his insights.  My big takeaway on the last mile was that you can count down the streets till the final turn.  We quickly picked up our packets and we made the long walk back to the hotel.

Race day arrived and the weather was great, the winds were sub 5 mph and blowing a slight headwind from the south.  The temperature was in the low 40s so you can’t get much more perfect than these conditions.  The race plan was to run 6:15s until 16 or 18mi then try to pick up.  That is basically 2:44 pace.  However, this made it unlikely that I would approach my 2:42 PR unless I really took off at the end of the race.  Matt and I rode the buses, which boarded runners near our hotel.  We were comfortable and relaxed listening to music to pass the time on the long drive to the start.  It was a little chilly so you had the option to stay on the bus.  However, there were so many buses that once you left, it would have been difficult to figure out which one you had been on.  We left the bus and took a seat near the gear check and portos and we took turns warming up.  I ran about a mile, stretched, and then we dropped our gear and tried to make our way to the front 8 minutes prior to race time.  However, the street is fairly narrow especially with the starting line gear.  We ended up stopped with others about 10 seconds back, and considering the volume of great runners there, we were probably lucky to be where we were.  They then opened the space between the elites and the rest of the field so I was able to get into a more comfortable spot.  I had read in the book there was an unofficial 2:45 group so I was on the lookout for that.  The national anthem was played by Vince DiFiore who plays the trumpet for the band, Cake, which is one of my all time favorites and local to the Sacramento area.

Suddenly we were off and I kept things in check on the downhill by sticking to the 6:13-6:15 pace.  Because there was a sharp turn and slight hill in the first mile or two I was very careful to stay according to plan and not exert myself.  As I settled in, I noticed a huge group of women and a few men were about 10-20 seconds further up the road with the women’s Olympic trials group.  I kept to my plan and avoided the urge to bridge the gap between the group and myself and run faster than the target pace.  There were some rolling hills in these early miles, nothing too steep but the pace group was running slowly up the hills and faster on the downhills.  This resulted in the gap yo-yoing a bit.  I had looked at the course map closely since the general water/Nuun tables were not at periodic gaps (like every 2 miles) but separated randomly.  I took water at every stop and made sure to take my gels roughly every 5 miles.  As we got to mile 10, I began slowly picking off a few runners and after the downhill through a small town I moved up to the back of the pace group without really moving out of my zone.

Now that I had bridged the gap, I ran at the back of the group content with the pace.  In the first 10 miles, I was running by myself or with a couple of others.  Now, I was running with many people around.  This made it difficult at the water stops and I tried to stay out of the way for the women when they got to their elite tables.  However, I had to miss taking water a couple of times and was slowed down at the stops by the traffic.  I don’t generally drink a lot of water and am lucky to get one gulp down.   No water between the 10 and 13 miles points!

I passed the halfway point at 1:21:49 according to my watch.  The group was starting to spread out and being at the back wasn’t far from front.  I could hear the pacer and he was telling stories about being in the army and running to help folks pass the time.  The pace was a little uneven between 13-20, some fast, some slow due to the small hills. Although I wasn’t feeling the hills in my legs, I wasn’t ready or confident enough to take off at the 16 or 18-mile point.  I decided to make it my mission to stay with the group.  The pacer started to quiet a bit and one of the guys requested a story around mile 19.  The pacer admitted his hamstrings were tightening up and there was someone up the road that would take over.  About then, the group seemed to implode.  I hadn’t realized that the pace had slowed but later looking at the splits I was now now 5 seconds behind the 2:44 pace.

My hamstrings were starting to cramp due to the heat but I ignored it.  The same had happened in Boston in 2016.  I also stopped caring about maintaining the 6:15 pace and started to race.  A woman and I started to pick thru the runners ahead who were beginning to fade.  When I looked at my watch, I realized that we both were on a  6:06-7 pace.  It felt natural and I tried my best to stay with her.  After nearly 3 miles at this pace I had to let her go.  I was now tiring and no longer felt as well as I had earlier.  I decided to slide back to a 6:15 pace wanting to avoid my usual last mile or two implosion.  I have never run a negative split before and always suffered a slow down at the end of my marathons.   This was probably why I was reluctant to lower my pace at the 18-mile point.  At the 23-mile point runners were more spaced and I when I thought that I could pass someone I picked it up.   But now there were far fewer carrots to chase.  Running the last couple miles of the course with Matt the day prior really paid off since reaching familiar ground helped me keep it together.

The finish is a tight set of left turns in the last 200 meters.  I was able to finish strong and pass some guys near the end.  No implosion came and my time was 2:43:36, which meant that I had run a 2 second negative split.   To me this was fantastic.  Even when I ran my PR of 2:42, I had run a 2-minute positive split.  At 2:43:36 this was my third fastest marathon and fastest since turning 40.  It was definitely the best executed marathon that I have ever done.  The competition was keen and my place - 260th place overall and 25th among the Master runners was very good considering the number of runners.  I was delighted that I had been able to pass about 100 runners after the 10k point.  Well worth the trip back to California!

I will have to put the goals higher next year and see if I can get to under 2:42. 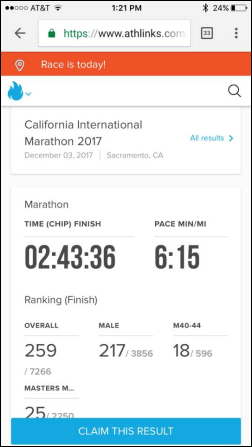