Amazing Day at the 2015 Boston Marathon 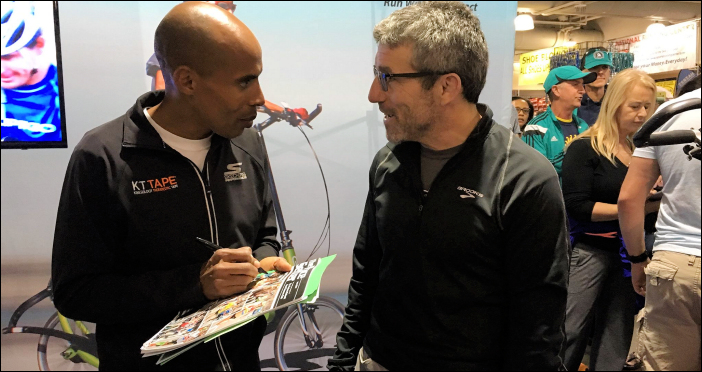 I have been going to Boston to run and, more recently, to take pictures since 2005. I discovered that, to me, the best place to take great pictures of my friends, local runners or the top marathoners is at the southeast corner of Commonwealth Avenue and Hereford Street. At this point one may look west down Commonwealth Ave. toward Massachusetts Ave. and see the runners for 200 meters as they approach the second-to-last turn in the race and as they turn to the right in front of you as they begin the three-block run up Hereford Street. Each year I get there early to secure a good spot and I’ve met the same race fans there for the last couple of years.

In 2014 I had the pleasure of being there when the leaders came into view as they came up from under the Mass Ave overpass. To the pleasure of many thousands of spectators along this stretch of the race, the American Meb Keflegzighi was the leader. As he approached and passed I was able to get several very good photos of the eventual winner. 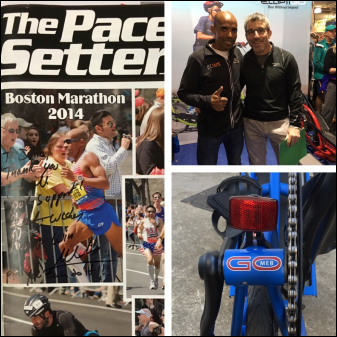 A few of my pictures from that race were featured on the cover of the Pace Setter Magazine a month or so later, including one of Meb. In 2016 I returned to Boston to photograph the race and brought along my copy of that Pace Setter. I thought that maybe, just maybe, I’d have a chance to wait on line at the Expo to get Meb to sign my Pace Setter.

The day before the race I walked over to the Expo with my new girlfriend Carol for one last try to see Meb. We were supposed to be meeting Brian and Jess Northan at Fenway Park for a game. We were late. I had the Pace Setter with me in a folder. As we walked through the Hynes Center we came to the Elliptigo booth and the Sketchers booth, which were across from one another and both were Meb’s sponsors

I soon struck up a conversation with one of the young Elliptigo Reps. He asked where I rode mine and told him I was from upstate New York. He smiled widely and stated that he had great memories of the upstate area and that he’d very often trained with his dad in the Glens Falls/Lake George area. So, being curious, I asked if his dad had ever run the 10-miler from Lake George to Bolton Landing. He stated that, why yes, his dad had run it and in fact he thought that his dad held the course record. Of course I asked his dad’s name and he let me know that his dad was none other than Barry Brown! Of course I knew who Barry Brown was and, in my surprise asked, “Wait, your dad is Barry Brown!?” This young man’s name is Darren Brown who, in his own right was and still is a great athlete. He and his dad were the first American sub-4:00 mile duo!  He and his very fast wife still train and run and have started a family now too.

So we chatted a little about that and I let him know that I was hoping to try to catch a glimpse of Meb and maybe get his autograph on my Pace Setter, which I then showed him. To my great surprise and hair-raising delight he said something like, “That’s great! Wait here, I’m going to get Meb at his hotel and we’ll be right back.” I was speechless. While I waited there, super-Ultramarathoner Dean Karnazes, another Elliptigo rider, came by and was chatting with us too. In just a few minutes time there we were, chatting with the 4-time Olympian, NYC and Boston Marathon Champion Meb Keflezighi! Meb was very accommodating, encouraging and very happily signed my Pace Setter and had a picture or two taken with me. He is as everyone describes him. Amazing!

I’ll never forget it. In about 30-minutes, in a quick, last trip to the Expo before going to a Red Sox Blue Jays game, I met three great runners, Darren Brown, Dean Karnazes and the amazing Meb Keflezighi!

This made a good impression on my new friend Carol. 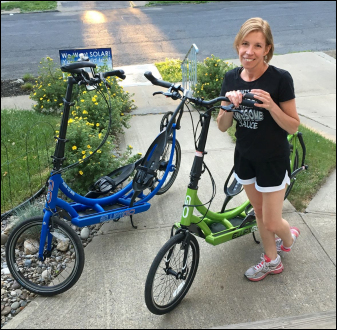