To poets November is a dreary month full of gray days, but to runners it is a glorious month full of thrilling races with the Stockade-athon being preeminent. The Stockade-athon is one of the oldest 15K races in America having started in 1976 with 80 runners! It is the last major distance race of the season and serious runners love it even though the 9.3-mile course can be brutal. This year’s race is highly anticipated because of a father-son dynamic, top-class entrants, and changes to the race itself. The 42nd MVP Health Care Stockade-athon organized by the Hudson Mohawk Road Runners Club (HMRRC) will be one for the books.

The creator of the Stockade-athon, Mark Mindel, will be running with his son Scott who hopes to better his 2010 Stockade-athon PR of 48:12. Mark has the distinction of having run consecutively every year in the race he founded. His son Scott mentioned that his dad may need duct tape to hold himself together this year, but he will be on the course, rain or shine. Both are remarkable runners. Mark won the international Montreal Marathon in 1979 beating over 10,000 entrants in 2:26:55. In addition to receiving a trophy, he was given a Caribbean vacation and a year’s sponsorship by Brooks.

Talent seems to run in the family as Scott Mindel has also had phenomenal success. Scott runs for the Saucony Hurricanes and Central Mass Striders. He has distinguished himself at this year’s Boston Marathon by coming in 23rd with a time of 2:22:27. In 2013, in a warm Boston, he placed 30th with 2:22:25 placing him at the finish line hours before the terrible Boston Marathon bombings occurred. He ran the Berlin Marathon in October of this year hoping for a PR but due to many factors including inclement weather he finished in 63rd place, which is beyond respectable for one of the world’s largest and most famous marathons. Also, this race enabled him to have an extended honeymoon abroad and partake of the world famous Oktoberfest in Munich, which features one of runners’ favorite beverages, and then travel around the Continent. On his return, he celebrated by running the Army 10 Miler coming in 29th in a field of 25,781. His performance at the Stockade-athon will be one to watch.

The competition is intense this year. Ricardo Estremera, 31, a native Puerto Rican, who is working on his PhD in Spanish linguistics at SUNY Albany is an experienced racer. His specialty is track, where he has won many awards, but his road races are equally impressive. He represented Puerto Rico several times and in 2016 was a bronze medalist at the Iberoamerican championships. He was also an NCAA Div. I All-American in 2009 (3,000m steeplechase). In 2016 he was just seconds shy of representing Puerto Rico in the Olympics. He has won the Troy Turkey Trot twice, running 30:59 in 2016. In September he won the Oktoberfest 5K in 14:55. He is looking forward to running the Stockade-athon as he is in much better shape than when he ran it in 2013 in 48:29, and is shooting for a low 46 minute run.

Mollie Turner, 37, is also looking to better her record from last year’s 3rd place. She too runs for Willow Street. At James Madison University in Virginia she was a three time All American. This year her running has been phenomenal. In March she was 1st in the Runnin’ of the Green 4 mile race 23:18; 2nd in the Shamrock Half Marathon in 1:21:12; and 1st Age Graded at the Chicago Shamrock Shuffle 8K in 28:07. In April she placed 1st at the Bacon Hill Bonanza 10K in 36:57. In June, she placed 1st at Kinderhook Bank OK 5K in 17:23. In September, she came in 1st at the Saratoga Palio Melanie O’Donnell Half Marathon in 1:21:54, and 1st at Malta 5K in 17:14.

Also on a roll is 42 year old Master’s runner Renee Tolan who has won national Masters races against fierce competition. She placed 9th last year in 56:27 but was 1st age graded. In August she won the USATF National One Mile Masters Championship in Flint, Michigan in a time of 5:25. She ran conservatively at first following the pack and accelerated near the end. Her next big win came on September 11, the day after a family run at the Malta 5K where her two daughters age 8 and 10 came in one second before her with her husband also finishing. Not daunted by this exertion, the next day Renee ran the international New Balance 5th Avenue Mile in New York City placing 1st in her age group in 5:03. Renee said that she is not sure if she will run because she would have to sandwich it in between 2 short distance races, but she is a true-blue runner and the thrill of the Stockade-athon will probably prove irresistible.

Anny Stockman, 85, will run the Stockade-athon for her 35th time and hopes to set a record for her age. Anny has had a spectacular running career winning the HMRRC Grand Prix every year in her age group. Since reaching 85 in June she ran the Kinderhook Bank OK 5K in 40:25, the HMRRC Distinguished Service 8 Miler in 1:59:03, and the Malta 5K in 41:12. She is inspiration to us all.

Local celebrity, Benita Zahn,who is co-anchor of NewsChannel 13 Live at 4 and 6 with Jerry Gretzinger and writer of a health blog, will again compete in the Stockade-athon. Benita believes that exercise leads to a healthier, longer life and practices her convictions. She is an avid runner and triathlete and has run the Stockade-athon many times delighting in its celebration of the Schenectady community and health. 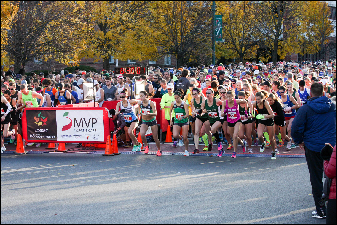 This year has seen major changes in the race. For the past 18 years Vince Juliano did a great job as the director but the reins of control were passed onto a committee of five: Ray Newkirk, Jon Rocco, Ed Neiles, and Brian and Jessica Northan. They have instituted significant changes. For the first time elite runners were not sought and instead our incredibly talented local runners were honored for their hard work and skill. A new MVP Stockade Cup Relay was added to the race structure consisting of corporate teams of three each, being either all male or female, who will each run a 5K leg of the race. The top male and female team will win the MVP Stockade Cup. Further prizes will be given for fastest times within each leg. Early registered teams include The Albany Police Department, MVP Health Care and Osprey Software Inc. As usual there will be hot and cold refreshments after the race but this year the Great Flats Brewing Company in Schenectady will give each finisher a glass of their brew. There will also be a children’s one mile run after the main race with awards and goodies being given to the kids. On the day of the race, the Schenectady YMCA will provide a Kids Zone with free kids’ activities. On the day before the race, Saturday, November 11, there will be early packet pickup at Fleet Feet Sports in Albany from 10 a.m. to 4:00 p.m. People are encouraged to bring dry and canned foods on Saturday to Fleet Feet, along with any used sneakers that can be given to local charities. A pre-race pickup is also available at the Schenectady YMCA from 7:00 to 8:15 a.m on race day Again, food or used running shoes are welcome.

Running the Stockade-athon is not easy. One of this year’s top competitors, Aaron Lozier, had this to say about it, “It’s so easy to go out too fast in the first couple of miles and that puts you in the hole because you climb and climb and climb for what seems like the rest of the race. The last few miles downhill feel like you are just recovering from all the climbing. I hate this race,” yet he loves to run it as do the many others. As they traverse the streets of Schenectady on Sunday, November 12, you can cheer them on. To find out more about the event go to www.stockadeathon.comwww.stockadeathon.com. Happy running!