Off The Road – Multi-Lateral Development and the 7 Primal Movements

Multi-lateral development is a quality that falls into the category of invisible training. Invisible training is work that strengthens or tones areas of the body which, to the naked eye, cannot be seen. If one were to visualize the physique of a male or female bodybuilder for a second – no one says to himself – “Wow, look at that multi-lateral development!” MLD is not what you see.

Why MLD is important is that it provides stability to the body as one moves, particularly joints that have large ranges of movement such as the hip, shoulder and subtalar joint in the foot.

Stability to these multi-axial joints helps literally “hold the joint in place” so larger muscles get a better mechanical advantage and can drive the body in desired directions.

The problem that comes about is that as we age we get more set in our ways and in no small part, particularly for a runner, we move in straighter and straighter lines. Granted it is a more efficient movement pattern, we are all busy and there is less “wasted” effort. The problem that develops is that MLD is very much a “use it or lose” quality. All this straight-ahead movement leads to decreased ability to stabilize the multi-axial joints and subsequently inefficient actions that may ultimately result in injury.

This lack of multi-directional activity is exacerbated for the runner. The countless steps that make up training sessions and years and careers are almost exclusively done in a straight line. The “more and more” training becomes “less and less” MLD.

The solution is to schedule in, on a regular basis, some MLD. This recommendation is frequently a bitter pill for those who like to bang out five miles at lunchtime, towel off and go back to work. They would rather just run than train with some form of intention. But again, what I’m recommending is 2-3x per week for maybe 10-15 minutes.

One school of thought regarding MLD is that one should cycle through what are called the 7 Primal Movements. This is a series of movements that are used daily by a “well rounded” individual. Listed they include push and pull activities, squat and lunge activities, bend/hinge and twist activities and finally some form of cyclic exercise.

Cyclic Exercise - Right off the bat runners have the cyclical exercise covered. For those considering some variation cycling, swimming, elliptical running, XC skiing or swimming, all traditional cross training methods, could give some variation to this cyclical activity.

Push-Pull – Push-ups immediately come to mind and if one has a gym membership most machines and weight lifts involve pushing. Pulling could be done at home with elastic bands or at the gym by noticing which activities draw the weight or resistance towards the central core of the body. 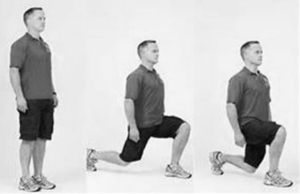 Squat-Lunge – Both these exercises could be done at home with minimal equipment. At the gym extra resistance can be added with weights. If all this is new to you begin easy by just honing the pattern for a few workouts before adding any weight. One or two sets of 10 repetitions will suffice – remember the goal here is to tone areas and not so much to create muscular hypertrophy or to set any records. 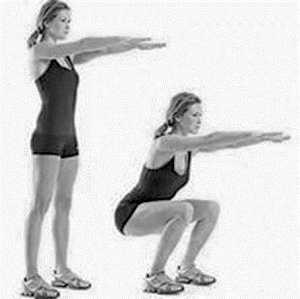 Hinge-Twist – Of all the movements one should approach these two with caution. The chance to overdo right from day one is real. Leaning forward to touch one’s toes isolates the muscles that run parallel to the spine. It is acceptable to bend the knees here and as fitness improves one can add dumbbells to the exercise. The twist is an upper body rotation to the right and left. Ideally movement should be slow and controlled. To quickly jam the torso to its end range invites back problems. Once again, as fitness improves one could hold a barbell plate or medicine ball to increase resistance.

It should be noted that there are many “roads to Rome.” If you are partial to yoga, Pilates, t’ai chi or some version of P-90X or Insanity are all programs that could be custom designed to re-create the Primal Movements and create MLD.

Stephen Covey used the analogy of “sharpening the saw.” The story was of two carpenters. One took time periodically to sharpen his saw and other tools with the result being ease and precision in his work. The second carpenter just wore his tools to the nub, pressing harder and harder and getting less and less for his effort.

To excel involves a passion for the things you love to do and a willingness to complete what you need to do. MLD, the 7 Primal Movements may not be sexy, glamorous or even visible to the untrained eye but they are a critical piece of the larger puzzle of successful training and competition.

Russ Ebbets, DC lectures nationally on sport and health related topics. He is a USATF Level 3 Coach and serves as editor of Track Coach, the technical journal for USATF. He is author of the novel "Supernova" on the famed running program at Villanova University and the High Peaks STR8 Maps trail guide to the Adirondack 46 High Peaks. Copies are available from PO Box 229, Union Springs, NY 13160. He can be contacted at spinedoctor229@hotmail.com