Larissa Bates: A Profile in Courage … Why I Decided to Run NYC Marathon 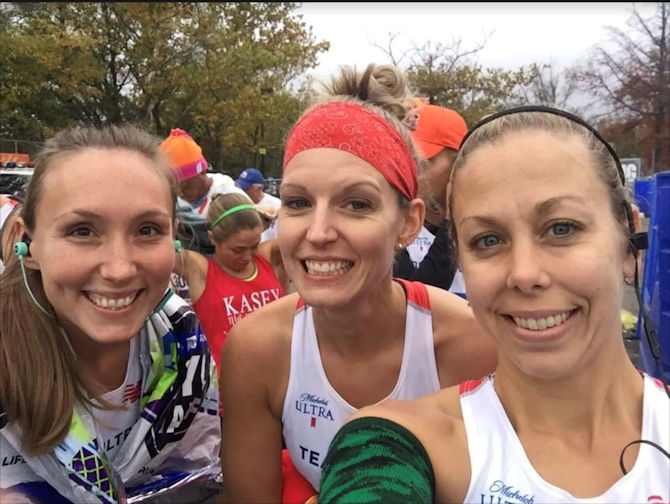 Two months ago I could not run longer than a 1/4 mile without stopping due to a bilateral pulmonary embolism. The fact that I was able to finish 26.2 miles on November 5, 2017, one month after my diagnosis, was a bigger accomplishment to me than any PR or BQ. I listened to my body and walked when my heart rate got too high. I took in everything and just enjoyed the ride. I could not be any more proud of my 4:09:56 time and I cried happy tears as I crossed the finish line. What an amazing experience it was that day.

This past fall I was registered to run the Chicago Marathon on October 8, 2017. It was the first race that I had qualified to run and I was really excited to attempt to run a time that would be fast enough for a BQ. A week and a half before the marathon I started having a really hard time running. My breathing was becoming very labored at easy paces and my heart rate was extremely high. A couple days after that started, I woke up in the middle of the night with tightness in my left calf. That week I had a deep tissue massage and saw my physical therapist, but nothing provided relief. Throughout that week all of my runs just felt terrible, but I chalked it up to the weather being unseasonably hot and humid for late September. The Monday before Chicago, 6 days before the marathon, I went for a very easy 6 mile run during my lunch break at work. My coach told me to keep my pace just under 10:00, which should have been very easy and comfortable for me. A half mile into the run I had to stop because I had such a hard time breathing and my heart rate was already up in the 170s when I was running at a 9:50 pace. Throughout the entire run I had to frequently stop to catch my breath, and it got to the point I could not even make it through a 1/4 mile without stopping because I started to feel dizzy. At one point I sat on the stairs in front of a building along my route and thought to myself "How am I going to hit my goal of a BQ in Chicago when I cannot even hold a 10:00 pace for a half mile?"

When I got back to work I contacted my coach, Karen Bertasso, right away to tell her about my run. I really appreciate that Karen has a medical background and I always feel confident in the advice she gives me. I only told her about my breathing and heart rate problems though, not my calf discomfort. She thought that I could be getting sick and recommended getting some zinc into my body. I decided to go to Urgent Care right after work and tried to get a z-pack in order to try to get better before the marathon that following weekend. The physician's assistant at Urgent Care asked about my symptoms, and at first I only told him about my breathing issues and high heart rate that had been plaguing me for over a week by that point. He asked if I had any leg pain and I told him that I had experienced tightness in my calf for a week. At the time I could not figure out why he would ask about my leg when my problems were in my lungs and heart. He also asked if I took birth control pills, which I had for several years. He then very calmly told me I should consider going to the Emergency Room in order to get tested for blood clots. I laughed for a second because I thought only unhealthy, inactive, overweight smokers developed blood clots. I protested a bit because I thought he was being overly cautious, but he assured me that going to the Emergency Room would be the quickest way to figure out the underlying cause of my problems. With Chicago only 6 days away I wanted answers quickly, so I took his advice and headed right to the closest hospital.

While I was driving to the Emergency Room, the physician's assistant called the hospital in advance to let them know I was on my way. He provided them with a report of my symptoms and his concerns. When I arrived at the hospital they took me in immediately without me having to endure the normal long wait in the waiting room. In the Emergency Room a doctor ordered various blood tests, including a d-dimer test that is used to test for the presence of blood clots. When the d-dimer test came back positive, the doctor sent me to have an ultrasound done on my leg and a CT scan done on my lungs. After 45 minutes of waiting for the results, I was shocked when the doctor told me that I had a large deep vein thrombosis in my left leg that had been breaking off and sending blood clots into both of my lungs causing a bilateral pulmonary embolism. The doctor repeatedly emphasized the seriousness of my condition and told me I would not be running a marathon that weekend. Instead of going to Chicago, I had to stay in ICU for a couple days while having blood thinners put into my body via IV. When I was discharged from the hospital I was told that I would not be able to run for two weeks, and that I would be on blood thinners for at least 6 months to prevent more clots from forming and to help the clots already in my body dissolve.

My cardiologist and hematologist have told me that they believe the cause of my blood clots was the estrogen birth control pill that I had taken for years. All other tests that were done to determine the cause of the clots came back normal. While I had never had blood clots before, and there was no history of blood clots in my family, I noticed that running started to become difficult for me that prior spring. I remember having the same calf discomfort at times during the winter and in April I noticed that my breathing was becoming more labored during runs, especially races. I could no longer really push myself during races last spring because my lungs would not allow it. In fact, my breathing had become so labored during races last spring that there were times when I had to stop and walk, which had never happened to me before.

After being plagued by these breathing problems last spring, I saw a couple doctors with hopes of being provided some answers and relief. I had one doctor diagnose me with exercised induced asthma, but the inhaler she prescribed did not help. Another doctor tested my iron levels and thought that an iron deficiency was the cause for my decline in running performance. But even after taking prescribed iron supplements for months I never fully went back to feeling how I did prior to developing the breathing problems. I was also told by a running coach that I had overtraining syndrome, and another running coach told me that I just needed to develop "mental toughness" and push through the discomfort. As much as I tried to really push during races and workouts, my lungs felt like they were going to explode and my body felt heavy like lead. Little did I know that a dangerous, life-threatening condition was developing in my body.

After I informed my cardiologist and hematologist about the breathing problems that I had experienced since the spring, they concluded that I started to develop blood clots several months ago. As the blood clots developed the blood vessels in my lungs were becoming partially blocked, which made breathing harder for me and my heart had to work harder to pump blood to my lungs. Not only did this make breathing difficult for me, but it caused my heart rate to increase more than normal. Over time as the vessels became more blocked in my lungs, my breathing became more difficult and my heart rate increased. Even though it is scary to think about what could have happened if I did not listen to my body that Monday in October, I am relieved to finally have an answer as to why I was struggling for months when running. It will be a few months before I can push myself again during runs, but for now I am just enjoying easy running while my body continues to heal.

Why I Decided to Run NYC Marathon

I had applied for entry to the NYC Marathon via lottery over the past couple years, but was never lucky enough to be chosen. This past summer Michelob Ultra, one of the sponsors of the marathon, held a contest where they gave away 95 entries to form Team Ultra. All I had to do to enter was write a short paragraph about what inspires me to run. I wrote about a horseback riding accident that I had at the beginning of 2013 that resulted in a compound fracture in my left ankle. I had to have a plate and pins put into my ankle, and I could not even walk for months after the surgery. During my recovery I promised myself that I would never take my health and physical capabilities for granted once I healed, and I started running that following summer. In August of 2013 I signed up for my first 5k. I ran my first marathon in October of 2014 in 4:31:58. NYC was my 6th marathon and my current marathon PR is 3:44:29 from the Marine Corps Marathon in 2016. I love how running is always challenging me to conquer new goals each season.

This past summer I could not believe my luck when Michelob Ultra selected me as one of the 95 members of Team Ultra from over 6,700 applicants. I was so excited to have the opportunity to run the NYC Marathon and decided that I would run it as a "fun run" after Chicago. When my doctors cleared me to run after being diagnosed with the blood clots, I decided that I would still attempt to run the NYC Marathon, but I would be sure to take it very easy and listen to my body. The entire race I set my watch to heart rate and never looked at my pace or time. I slowed down and walked when my heart rate got too high. When I saw friends spectating along the course I stopped to give them hugs and talked to them briefly. I kept telling myself that my body had been through a lot over the past couple months and that I had many more seasons ahead of me to really push myself during a marathon to achieve my goals. The NYC Marathon was about the experience and celebrating life, and I am forever grateful that I listened to my body when it mattered the most.