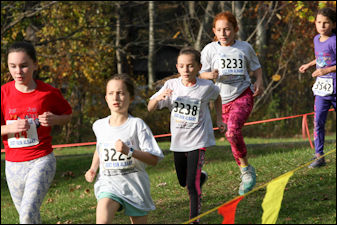 If joy and enthusiasm could be bottled, the Just Run Program would be in the S&P 500 Stock Market Index. Contagious excitement and energy fill the air. The experience at being at one of these events is so joyous that Director Ken Skinner has no trouble getting volunteers to return since the program began in 2010.

The genesis of this began in 2009 when the club had to deal with the issue of how to spend the surplus money the club had amassed. The Long Range Committee was given the task and they decided that a program that fostered the love of running and exercise in children would be a perfect reflection of the club’s values. After doing research and looking into programs, Ray Newkirk discovered online "Just Run" a web based program that promotes running for children that the HMRRC could use with schools. However, they needed someone to run the program and this is where Ken Skinner enters the narrative. 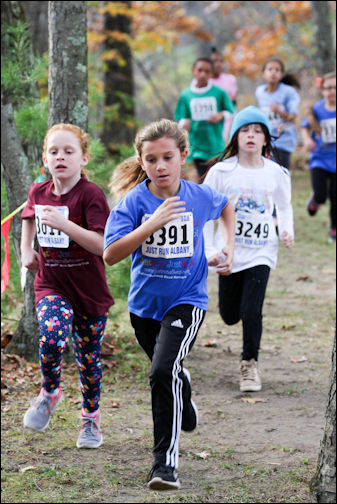 Ken had been a high school track star specializing in 800 meters. He participated in college track but decided he had to focus on academics. His running lapsed and as the years went on he gained weight. When he reached his 40th birthday he resolved to resume running to implement a healthy life style. He started doing laps and then graduated to long runs and this is when his life truly changed. He met Ray Newkirk and as they ran around SUNY Albany, Ray first persuaded him to join HMRRC and then later to take on projects for the club. His volunteer work started gradually and soon escalated to the point that in 2000 he earned the HMRRC Distinguished Service Award; and in 2007 was honored with prestigious entry into the HMRRC Hall of Fame for his multiple services to the club. When asked how he was dragooned into being the head of the Just Run program while having so many other responsibilities Ken replied that once again his “nemesis” Ray Newkirk recruited him. Ray approached him saying, “Hey you don’t have anything to do so why don’t you coordinate this.” He has served in that role since 2010 watching the program grow from 8 schools to 30. Unlike other directors in the program, Ken as a volunteer has never been paid as in other chapters, making it possible to plow more money into the program. Albany Mayor Cathy Sheehan recently honored Ken for work on the Just Run Program and volunteering in the Albany schools. 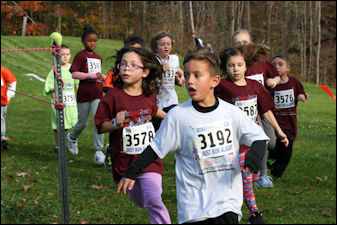 The Just Run Program was developed by Big Sur International Marathon, a non-profit organization in California that gave the profits from its Big Sur Half Marathon to create the program. all the proceeds from the . Just Run is geared towards promoting fitness and healthy lifestyles in grades 2-8. It has has three parts: encouraging physical activity through running and exercise; developing healthy eating habits taught by the school nurse or cafeteria staff; and promoting good citizenship through good deeds like perfect attendance and good classroom behavior. It is expected that all participating schools will hold at least one session per week after school for an hour. Sessions include stretching exercises, how to warm up before running, and the importance of hydration. The kids usually run on a track or a path around the school. The Arbor Hill School in Albany is fortunate enough to have a big track with hills enabling them to do hill repeats.

Originally 8 schools were in the program mainly from the Albany school area where Ken still volunteers. Then the Guilderland schools jumped on board quickly followed by others. The thrust now is to reach out to schools that do not have many after school activities for children. As part of the program there is a fall cross-country meet, and in spring there is a two-day track event. Bob Oates and Sandy Morley, both retired teachers/administrators help Ken direct at the spring and fall meets. It is estimated that the Spring 2018 track days will involve 30 schools!

The program parallels the school year. Fall program activities start late and end early. Due to early sunsets and colder days the kids can only practice for about six weeks before the date of the cross country meet. Schools use the winter to get paperwork done for the program, and if the person in charge is a Physical Education teacher they usually will have kids run indoors. By April kids can go outdoors to train. The Just Run two-day track meet takes place during the first week in June. During summer Ken goes out to recruit new schools. Burnt Hills was most recent school to join.

As the school numbers have increased, so has the HMRRC budget, which presently commits approximately $45,000 to the Just Run program. Funds are given to all participating schools to help them in implementing the program and every kid is given a free race T-shirt. HMRRC membership fees and race profits have made this possible and members should be proud in knowing that our club is giving the youth of the Albany area the gift of running while emphasizing the value of healthy living.