2016 HMRRC Anniversary Races In The Books 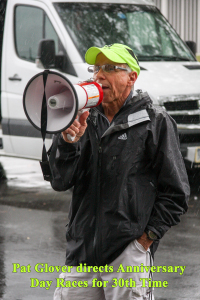 As athletes arrived to register (free for HMRRC members and $5 for nonmembers) in the two longer events, they were presented with commemorative glassware just for showing up! There was also historical information regarding the early years of the club, along with pictures and results from previous years, on display and perused by runners before and after the event.

At the start it was once again special to have four of the original 13 runners present: Marbry (Pulver) Gansle, Burke Adams, Ed Thomas, and Don Wilken were introduced as being part of that inaugural race 45 years ago. This year each one of them was part of the action by either volunteering or competing!

As the the kids crossed the line in their Fun Run, each was presented with a medal and an official HMRRC water bottle koozie. In the adult events it was fresh-baked pies and bread from Bountiful Bread that were awarded to the top three overall winners in both races as well as age group winners in the 5.9 mi event. The latter also served up HMRRC Grand Prix points for club members. A free drawing was also conducted, in which certificates for bread, as well as glassware from previous events were handed out.

Bill Meehan, one of HMRRC’s astute photographers, was on hand to capture much of the action, and these pictures are now up on the web site. Check ‘em out, along with the complete race results and a list of our fabulous volunteers.

If you missed it this year, be watching for the date for the 46th Anniversary Race next September. If you made this year, be sure to join us again and bring friends, family and youngsters, too! You will all be part of the ongoing HMRRC running tradition stemming from that first race in 1971!