When Injury Strikes: An Interview with Tom O’Grady 2 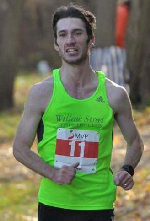 Tom O’Grady’s troubles began on a family vacation to Disney World to run Goofy's Race and a Half Challenge, January 9-10, 2016, that combines a Half Marathon and the next day a full Marathon through all of Disney World and its parks. It is an exciting event, which he did last year, but this time he knew something was wrong at the marathon when he had to walk-run after mile 22 and walk-drag his leg uphill. When he sought help his condition was initially diagnosed as an IT problem, so he went to physical therapy and was given exercises to do. Because his IT band responded well to therapy, three weeks later on January 31, Tom ran the HMRRC Winter Series Race #5, winning the 10 miler, but realizing at the end that something was seriously wrong. He used the runner’s quick healing repertoire of icing, Ibuprofen and rest, but unexpectedly found that he was in worse pain the next morning. When he walked he heard a creaking, grating sound like stepping on a crunchy rubber band. On Feb. 1, he called podiatrist Dr. Marc Ginsberg, who after examining him, gave him the bad news that it might be a partial tear of the Achilles tendon. Tom left the office in a walking boot. He next went to see Dr. Todd Shatynski, a sports orthopedist, since his IT band was also acting up. At this point Tom didn’t know what caused what: did the IT band injury cause the Achilles problem, or vice versa? In the meantime, he had an MRI that confirmed there was a partial, L-shaped tear at the base of his Achilles tendon. Surgery was not recommended since it was not a complete tear, but Tom had to wear a boot when walking for a month and give up running for a time. Did this stop him from exercising? You bet it didn’t. 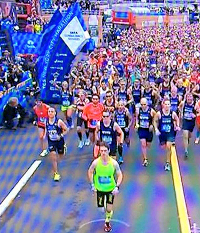 Since he could no longer run, and the family had planned on getting a YMCA membership, they began to go the YMCA in Delmar after work and while they swam, he took up strenuous aqua jogging for several days each week. He also did other non-weight bearing exercises to stay in shape and bought a spin cycle to work out on at home. He was told that in most cases it would be four months before he could think of running, but after five weeks on this regime, much to the amazement of his doctors, his recovery was such that in March he was told he could start physical therapy and begin walk-running. Which he made the perfect occasion for him to train with his wife, Sara. By the end of March, they were doing three-mile runs together every two to three days and he has been hoping to increase his mileage steadily. After all exercise, Tom would diligently ice massage his tendon to reduce inflammation. In addition to exercising, Tom began physical therapy twice a week (for six weeks) with Brad and Michelle Rocklein. While at physical therapy, the Rockleins used ultrasound to facilitate proper healing as well as massage. After this they would work on various range of motion and strength exercises. The program emphasized strengthening the ancillary muscles that Tom had not worked out as much while focusing on running. In between visits to the physical therapist, Tom would use Kinesio Tape on his injured tendon. Kinesio Tape is a rehabilitation tape that is used to facilitate the body’s natural rehabilitation process.

Tom credits his phenomenal recovery to several factors. First, he listened to his body and received quick medical advice after the injury. In addition to getting a quick diagnosis, Tom followed all the doctors’ orders. He believes that maintaining a non-weight bearing exercise program (under doctor’s supervision) is also partially responsible for his quicker than usual recovery. The Achilles tendon, the longest and strongest one in the body, is different than other tendons in that it is encased in a protective fibrous sheath. Tom feels his non-weight bearing exercise increased the blood flow around the Achilles sheath facilitating faster recovery. However, Tom also notes that after coming out the walking boot, he had restricted range of motion and strength in his ankle. Receiving routine physical therapy treatment continued to facilitate healing and expedited his ability to return to routine physical activity.

So then there was the quandary of whether he should compete in the Boston Marathon as the race looms (Yes, Tom initially wanted to run the marathon still!). While his doctors were non-committal saying that the decision was his, Tom understands the severity of a setback at this stage in his recovery. Although as an athlete Tom desperately wants to run, he also looks forward to enjoying the race with his family in another way. So this year Tom will go as a spectator at the marathon instead. This will be the first time Tom and Sara have watched the race together and the first time the kids have been to the marathon since the 2013.

What is the lesson here? Listen to your body. After the fact, Tom’s streak meant little to him. What was most depressing was not being able to participate in an activity that has had so much positive impact on his life. Tom intends to more actively include rest and recovery into his running plan as he continues to build his training back up. Tom is currently an Assistant Professor at Albany College of Pharmacy and Health Sciences. As an individual who teaches public health courses he is grateful for having health insurance and a job that is flexible enough to allow him to regularly attend doctors and physical therapy appointments.

As part of Tom’s efforts to establish an active research program, he will participate in a training fellowship at the National Cancer Institute in Rockville, MD for nine weeks during the summer of 2016. While down there, Tom is hoping to enjoy all the museums and historical sites. Tom also hopes he will be at the point where he can participate in the thriving running community in Washington, D.C. There are friends who live there now who are from the Albany running community, such as good friend Greg Mariano (2:23:46 marathoner on Capital Area Runners who is from Colonie) as well as Kieran O’Connor (who won the Corporate Challenge in 2015 and qualified for the 2016 Olympic Trials in Los Angeles).

We look forward to following Tom’s progress on his road to recovery.

Top: Tom at the Stockade-athon