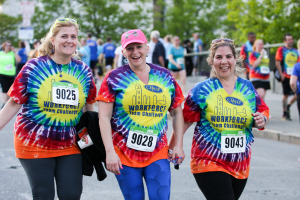 The Albany version of the race has always been organized by the HMRRC, but in 2004 when JP Morgan / Chase Bank withdrew its presence in the Albany area, the HMRRC began a stand-alone Workforce Team Challenge to continue the traditional team concept for the greater capital district community. Winning teams no longer advance to NYC, but instead earn bragging rights of winning a high profile local event with approximate 500 teams, 10,000 registrants and 8000 finishers …and what a spectacle it is!

In an effort to get feedback from teams as to why they participate, I arrived early and simply asked them.

Annette of the SI Group headquartered in Niskayuna is a regular runner and race organizer. This year she recruited 10 members to participate. Their reason for participation….”Team Building”!

AIM, a support group for the disabled had 20 participants and June and Emily agreed that their motivation was physical and mental health and wellness.

Jaeger & Flynn representative Theresa says their firm provides Human Resource support and benefits to clients and as their wellness manager, this is one great opportunity to promote wellness to their clients. Their enthusiasm showed, as they were excited in anticipation of the mass start of thousands of runners and walkers later on that evening.

Two talented endurance athletes, Joe and Kelly Sullivan were also looking forward to the event, as just another step toward their main goal of participating in a full Ironman at the Mont Tremblant Ski Resort in Canada later this August.

It was pretty quiet at t-shirt pick-up prior to the race, but that is normal said Jill Mehan, as despite encouragement, from race officials, runners prefer to pick up their shirts after completing the race. “It is crazy then” said Jill.

At 6:23pm, after a stirring live rendition of the National Anthem by Arielle King, 8000+ runners broke with the sound of the horn, and up front a trio of serious runners quickly separated from the pack, and engaged in a swift 4:55 per mile duel for 3 miles before Matt Brooker kicked clear of defending champion Kieran O’Conner and ROG 4 / Delmar Dash champion Eric MacKnight in the final 400 meters to secure the win. This was arguably the fastest 3-person leaderboard at the Workforce Team Challenge in decades, as the trio posted impressive final times of 17:01, 17:08, and 17:10!

Coincidently, Matt Brooker accepted a job at Commerce Hub one year ago (day after the 2015 CDPHP Workforce Team Challenge) after moving to Albany, and he bested two runners with impressive marathon credentials as O’Connor has a 2:20 marathon PB, and also finished 24th at the USA Olympic Marathon Trials in January. MacKnight of Global Foundries in Clifton Park has twice posted 2:22 marathons in recent years. 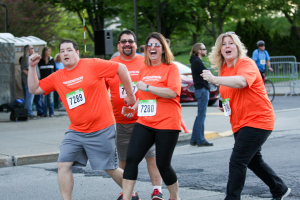 Fastest Workforce Challenge Times since 1995 when the race adopted the FRW course, with some modifications: (22 years). 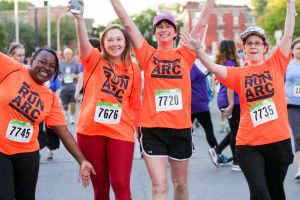 Female course record holder Megan Hogan also ran for her new employer (EYP) and was in good spirits pre-race as she was happy to have moved back to the area from NYC, secure a new job and is encouraged to be back running after a series of injuries that have prevented her from racing for nearly a year. Megan would finish the course at her training pace and enjoyed her run.

Closing Thoughts: The many volunteers are rarely recognized and often not appreciated for the stellar work they do. Yet they put in many hours of planning to make these events possible for the greater running community. This event has seen a number of improvements including securing a partner in AREEP for chip timing at this event in 2013, and also making an important course change that allowed better access for runners to enter Madison Ave from the staging area on the Empire Plaza. The CDPHP Workforce Team Challenge now has a certified accurate course and greatly reduced congestion leading to the start making the race start safer for runners of all abilities. Finish times for 8000+ are accurately recorded by state of the art B’tag computer software.